Millions of years ago, a massive tectonic shift cleaved East and Southern Africa creating the two Rift Valleys and the Drakensberg massif, in an immense geographic conformation that extends for more than 4 thousand kilometres. Among the most significant landscapes arising from the continental fracture, is the Blyde River Canyon (South Africa) – the third longest canyon in the world. Located less than 400 kilometres away from Johannesburg and Pretoria, the canyon is the ideal venture for an authentic weekend in the Southern African wilderness and the perfect gateway leading to the Kruger National Park and Mozambique.

The dark veil of fog welcoming visitors to the low lands of Sabie and White River should not discourage you. The trip into the valley of the Blyde River begins as a journey of self-inspection. A visit of the Sudwala Caves, 50 kilometres south of Sabie on the Panorama Route (R539/532), will introduce you to the articulated history of this dark paradise.

The caves formed about 240 million years ago and were used in prehistoric times as a shelter by the first dwellers. In the 19th century, the place became a stronghold for the Swazi kingdom and many battles for the possession of the unwelcoming land of Mpumalanga raged between the natives and the European trekkers. In the darkest depth of the caves, it is still possible to hear the echoes of the stalactites beaten as drums to alarm the inhabitants of an incoming threat. In modern times, the perfect acoustic of the place has been put to different use: those who are lucky enough to experience the rare live music performances hosted in the major chamber of the caves, are left thrilled by the life changing experience.

Continuing northbound on the Panorama Route, you will follow the footsteps of the Afrikaans voortrekkers. In the early 19th century, the Boer pioneers reached the canyon searching for gold, but they had to face starvation and to confront themselves with the unwelcoming Big Five: lions, leopards, rhinos, buffaloes and elephants, the ancient sovereigns of the land of Mpumalanga. Several battles raged between the colons and the local dwellers for the ownership of the land. Pilgrim’s rest, 15 kilometres East of Graskop, was a haven for miners during the gold rush and is still preserved in its original shape.

The small town of Graskop marks the beginning of a heavenly trip into the height of the Blyde River Canyon. When driving north, its proximity is anticipated by the majestic sound of the downpour of the Mac Mac waterfalls. The falls are famous for the pool conformations underneath the drop, where visitors can enjoy a swim in the most natural and peaceful of environments.

Graskop is an ideal stop during a trip in the canyon. The town offers a range of amenities with accommodating ranging from luxury to moderate, catering for all pockets. Relaxing walks and bicycle trails await, corroborated by South African and Mozambican treats in the local restaurants. The main attraction of Graskop is the Big Swing, a suspended wire over a gorge of the canyon. Leaping into the gorge, the most courageous visitors will float over a hidden cascade half the way between heaven and earth.

Five minutes away from Graskop lays a stunning panoramic view known as God’s Window. The walkway to the Window will take you through a thick and soggy portion of rainforest. It was once the main scenario of the canyon, before modernity converted extensive plots in the area into wood and banana plantations. Dark and mystical as it is, the path to God’s Window is worthy of the pen of Joseph Conrad and Ernest Hemingway. A crack in the mountain opens unexpectedly and what unfolds before your eyes is a balcony that faces over 200 kilometres of South African land lying underneath. On a sunny day, it is possible to see the lateral extension of the Kruger National Park and the lights of Maputo, on the Indian coast in Mozambique. 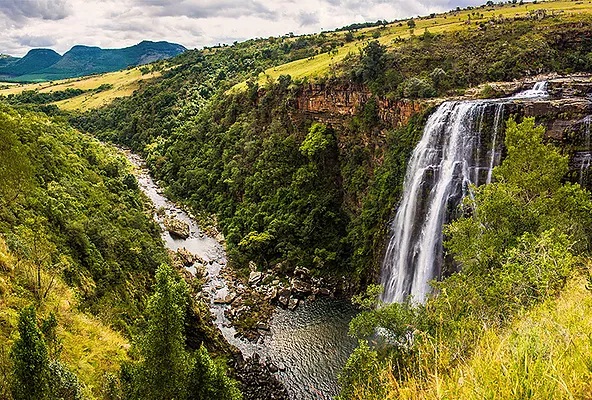 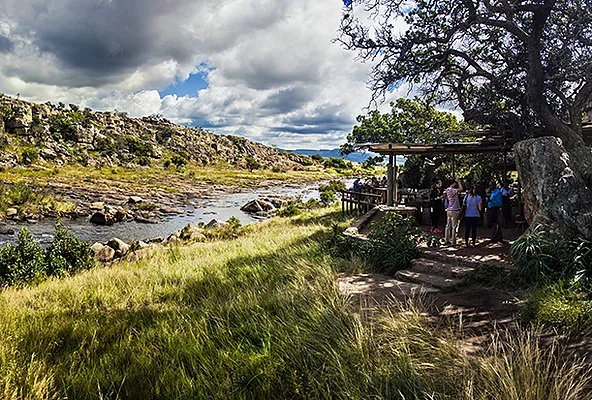 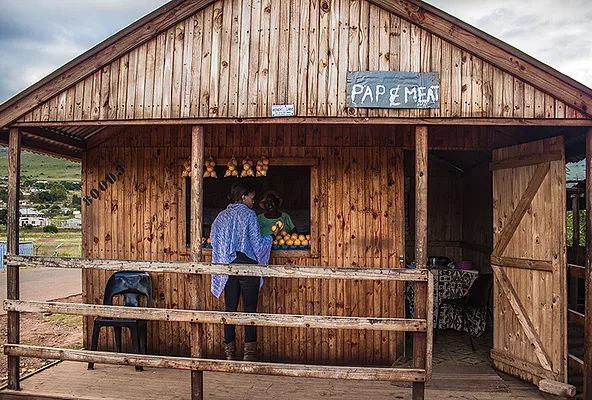 A street restaurant in Moremela.

The Panorama Route proceeds northbound through the valleys of the Blyde and its many tributaries. Their waters crack the ancient rock conformations creating spectacular waterfalls. Walking or cycling around the Lisbon and Berlin falls, you will become a guest of the mighty and untamed nature of Mpumalanga. Here it is possible to encounter lizards, snakes, baboons and unique birds in their habitat. In one of the many view points over the canyon, it is possible to dine at the Boskombuis restaurant, a shelter into the wild that serves tasty grilled meat. The prices à la carte are reasonable and the set up is definitely worth the short detour across the Treur River. In the restaurant you will enjoy a peaceful break under a wooden shelter, cherished by the calming sound of the river running a stone throw away from your table.

The confluence of the Treur River into the Blyde River is home to conspicuous populations of baboons. Approaching Bourke’s Luck Potholes, where the two streams meet, the sightings of families of monkeys becomes more common, as the animals have developed a peaceful symbiotic relationship with men. The Potholes alone are worth a trip to the canyon. Excavated by thousands of years of erosion, the riverbank of the Blyde presents a constellation of natural pools and cascades. The conformation can only be admired from above, on bridges that stand over the vertiginous cliff of quartzite and shale rock. Bourke’s Luck Potholes take their name from the Dutch settler Tom Bourke, who considered their sighting auspicious of good fortune in the gold rush. Needles to say, Bourke died in poverty.

The trip into the depth of the canyon, and into a human history of broken dreams, concludes at the Three Rondavels. The view of the hut-shaped mountain peaks is best appreciated in the late afternoon and at sunset. The three pinnacles watch over the stream of the Blyde converging into the Blydepoort Dam. They are named Magabolle, Mogoladikwe and Maserotothe, after the wives of Chief Maripi Mashile, who once owned the land.

32 kilometres away from the Rondavels on the R36, the Abel Erasmus Pass anticipates the entrance into the region of Limpopo. The tropical landscapes of Limpopo are the perfect antithesis of the gothic scenario of the Blyde River Canyon. Just as the steep mountains disappear on the horizon to be replaced upon your eyes by a valley of mango trees, a detour on your left will take you to the town of Tzaneen. In the paradisiacal settlement of Pedi people, it is easy to find street food treats, cold drinks and accommodation for the night.

This article was written by ALESSANDRO PARODI

Silverstar gets a Gold Star

The Splendor of West Coast Flowers

Born in Zimbabwe and living in South Africa, Miriro is a seasoned publishing editor and writer, having worked with leading brands in investment, business leadership and entrepreneurship. Passionate about Africa’s development, Miriro is also a dynamic marketing consultant with 10 years experience working with startups and large multinational corporations. With a heart for travel, Miriro spends her time discovering the nooks of crannies of Africa’s hidden gems, taking the roads less travelled, meeting the beautiful people and enjoying their food and culture. She enjoys tackling complex strategic challenges in the passion-to-entrepreneurship pipeline, particularly focused on the implications of 4th Industrial Revolution and workforce automation on Africa's travel and tourism industry.

The Splendor of West Coast Flowers

Wait! Have You Signed Up For
Our Weekly Newsletter?

Sign up for Nomad Africa’s weekly newsletter and never miss out on
travel and tourism updates across the continent of Africa. Get industry insights,
travel tips and understand how the latest trends will affect your business.
Learn more about African culture and support tourism in Africa.

Also Read:  No Armrest for the Wicked