Zanzibar is a beautiful country made up of groups of islands off the main coast of Dar es Salaam, Tanzania. It is mostly known for its diversified culture, tropical beaches and its spices. It is therefore no surprise why Zanzibar has one of the most unique gastronomy in Africa.

The Zanzibar cuisine has been heavily influenced by the island’s diverse culture. The distinctive cuisine comes from the multi-ethnic and multi-cultural nature of Swahili and Zanzibar’s heritage. Their gastronomy is a mixture of various culinary traditions from the early Bantu, Arab, Portuguese, Indian, British and Chinese.

The Bantus were the first inhabitants of Zanzibar and their main diet mostly consisted of seafood since they were good fishers. They enjoyed fishing and farming. They planted beans, yams, plantain and sweet potatoes which they incorporated into their dishes. The Arabs took over the island in the 9th century and brought with them new dishes and ingredients. The most notable ingredients the Arabs brought were a variety of spices. They also brought fruits such as mangos, citrus, coconuts and food such as rice. Rice is currently one of the most common ingredients in Zanzibar recipes. It is used to cook Pilau which is a notable dish in Zanzibar’s cuisine.

In the late 15th century and early 16th century, the Zanzibar Archipelago was conquered by the Portuguese. The Portuguese had a notable influence on the island’s cuisine. They introduced different types of staple food in Zanzibar such as maize, manioc and pineapple. The Portuguese were defeated and the Omani sultanate took control of the island in 1651. The Omanis introduced more spices and were good traders. The trade between Zanzibar and India introduced Indian recipes such as biryani, curry, cakes, samosa, chutney and masala to Zanzibar. These foreign ingredients were adapted to the existing recipes and inspired an original ‘fusion’ cuisine.

In the 20th century, Europe colonized most of Africa. Their presence is less evident on the Zanzibar cuisine but there are still traces in some of the common Zanzibar recipes such as Pepper steak which is believed to have originated in Europe. After independence, Tanzania formed a strong bond with China and traces of that relationship can be seen in ingredients such as soy sauce which is widely used in the island.

Here are some of the mouth-watering dishes that give Zanzibar its remarkable gastronomy. If you ever find yourself in Zanzibar, these are the must-have dishes you should try.

It is also known as ‘Zanzibar mix’ and is very popular. It is a spicy and rich soup with origins from India. The main ingredients are mashed potatoes, bhajia, raw mango, garlic, chilli and coconut chutneys. It is mostly served in the streets so it is very easy to find.

It is considered a relatively new addition to the Zanzibar culinary lexicon but it is very popular. Do not confuse it with the Italian Pizza because it is an extremely different but enjoyable version. It is made of unleavened flat bread that is stretched and filled with different delicacies before the sides are wrapped. The combination of the filling can include anything you want from minced meat, chicken, seafood, cheese, mayonnaise, eggs and whatever you deem a delicacy.

There is also the sweet version filled with different combinations of chocolate, banana, mangoes, peanut butter and other fruits. Its origin is unknown but it is prepared and sold in almost every street corner of Zanzibar by street vendors. 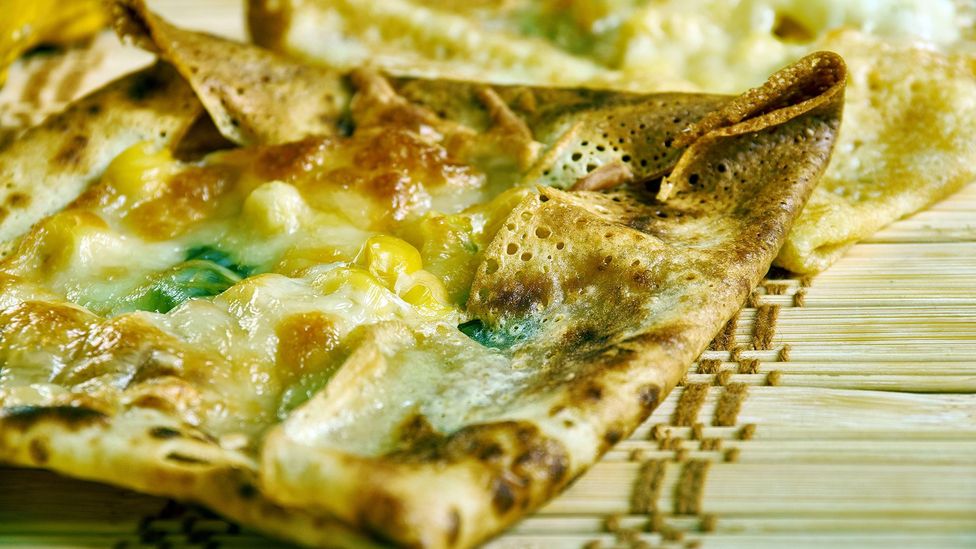 This is one of the most famous rice dishes in Zanzibar and has Indian origin. It is a rice dish cooked with a variety of spices such as cloves, nutmeg, cardamom, ginger, coriander, garlic, pepper and cinnamon. It is important to note that Biryani is cooked with meat whilst Pilau is made silly with spices and vegetables. Both dishes are tasty and can be found in almost all restaurants in Zanzibar.

Any meat lover is bound to have a love for this simple yet delicious street food. Mishkaki is Zanzibar’s street barbecue. The meat is skewered and covered in spices and is later flame-grilled on open charcoal. Mostly they use beef, octopus or chicken but mutton and fish is also available. The dish is mostly accompanied by French fries or butter naan bread. Given that mishkaki are a ubiquitous Zanzibarian snack, it is easy to get a fresh batch in the town’s alleyways on any given day.

Zanzibar is famous for its fresh and tantalizing octopus and it is therefore a common dish. In Zanzibar, Octopus is served in almost every form. It is grilled, fried and cooked in different ways. Octopus curry is one of the most popular ways it is served. Tender octopus is simmered in a rich blend of coconut cream, curry, turmeric, garlic, cardamom and lime. It is then served with rice and red chilli. It can also be grilled and served with different vegetables or rice. It is mostly served with grilled cassava topped with spices and oozing with flavor. This dish is considered a snack and it is available in different restaurants and street vendors. 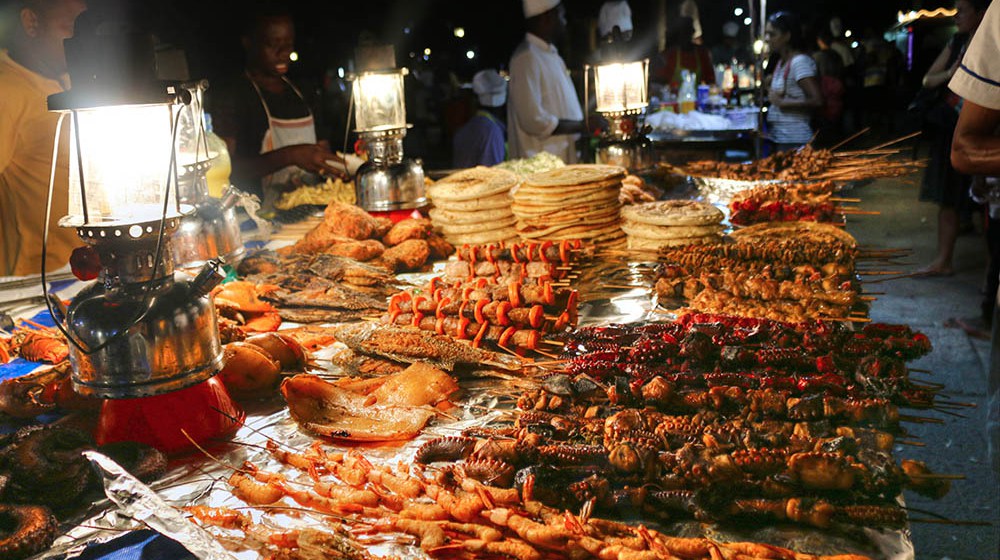 Also Read:  Lake Manyara - The Magical Treasures of the North

This dish is arguably the best example of fusion between India and Portugal. It comprises of boiled essential meat parts such as tongue, liver and heart. A balanced blend of spices is added to the dish. The preparation can be challenging because it is important to balance the spices. It is easily available in different restaurants in the island.

They are definitely popular breakfast snacks in Zanzibar. Vitumbuas are made of rice flour or plain flour, coconut powder, yeast, sugar and aromatic spices. They are later fried into coconut rice balls and have a fluffy interior that melts in your mouth. Mandazis are the Swahili version of a doughnut and are made with coconut milk and cardamom. It is often sweetened with honey. One can enjoy them with a mug of tea or a glass of fresh juice.

It is said that food is one of the greatest charms of any given destination. Zanzibar does not disappoint when it comes to its cuisine. It has an array of delicious dishes that are uniquely its own and cannot be replicated in any other part of the world. The local dishes are a highlight and help Zanzibar secure its spot as one of Africa’s richest and most dynamic culinary scenes.

Here is Why Every Woman Needs a Girls’ Weekend Away

Christine is a journalist and blogger from Kenya who is passionate about writing and taking full advantages of what the beautiful continent of Africa has to offer. With a degree in Journalism and Mass Communication at the University of Nairobi, Kenya, Christine has worked extensively with various publication in East Africa and on several projects within her editorial capacity. She enjoys blogging and writing stories that everyone can relate to. Christine has a keen nose for investigative journalism, she is a go–getter of opportunities and never afraid to live up to her full capabilities.

Off The Beaten Track in the Garden Route

Here is Why Every Woman Needs a Girls’ Weekend Away

Wait! Have You Signed Up For
Our Weekly Newsletter?

Sign up for Nomad Africa’s weekly newsletter and never miss out on
travel and tourism updates across the continent of Africa. Get industry insights,
travel tips and understand how the latest trends will affect your business.
Learn more about African culture and support tourism in Africa.

Also Read:  Cellulant Gets Approval from Bank of Tanzania to Become a Payment Solution Service Provider (PSSP)
We use cookies on our website to give you the most relevant experience by remembering your preferences and repeat visits. By clicking “Accept All”, you consent to the use of ALL the cookies. However, you may visit "Cookie Settings" to provide a controlled consent.
Cookie SettingsAccept All
Manage consent

This website uses cookies to improve your experience while you navigate through the website. Out of these, the cookies that are categorized as necessary are stored on your browser as they are essential for the working of basic functionalities of the website. We also use third-party cookies that help us analyze and understand how you use this website. These cookies will be stored in your browser only with your consent. You also have the option to opt-out of these cookies. But opting out of some of these cookies may affect your browsing experience.
Necessary Always Enabled
Necessary cookies are absolutely essential for the website to function properly. These cookies ensure basic functionalities and security features of the website, anonymously.
Functional
Functional cookies help to perform certain functionalities like sharing the content of the website on social media platforms, collect feedbacks, and other third-party features.
Performance
Performance cookies are used to understand and analyze the key performance indexes of the website which helps in delivering a better user experience for the visitors.
Analytics
Analytical cookies are used to understand how visitors interact with the website. These cookies help provide information on metrics the number of visitors, bounce rate, traffic source, etc.
Advertisement
Advertisement cookies are used to provide visitors with relevant ads and marketing campaigns. These cookies track visitors across websites and collect information to provide customized ads.
Others
Other uncategorized cookies are those that are being analyzed and have not been classified into a category as yet.
SAVE & ACCEPT