The crescendo of xenophobic violence gripping South Africa has rattled the collective conscience of South Africans, now finding their voice in Madiba’s own views on intolerance. In 1993, Mandela had warned against the growing dangers and risks of not tolerating diversity.

The simmering reality of xenophobia less than 18 months since the passing away of the icon serves as a stark reminder that words and warnings may have faded away if not his memory.

Artist Li Bin’s “A Tribute To Mandela” which was on display at the University of Johannesburg, South Africa, recently was a fitting and a sobering reminder of Madiba’s teachings.

Artist Li Bin took two years to create the 38 metre by 3.8 metre masterpiece. Before coming to South Africa, the painting was exhibited in Beijing, Hong Kong and Taiwan. The exhibition was opened to the public and visitors were be able to catch a glimpse of a unique vision presented by Li Bin that is rich in historical context and emotional content.

The Zendai Group and its local subsidiary, Zendai Development South Africa is proud to be associated with the painting and serve as co-sponsor for the launch.

Bin’s work was informed by the vision articulated through photographs and research during his visit to South Africa in 2013 where he met Mandela’s grandson Mandla Mandela.

While he never had the opportunity to meet Mandela in person, he took Mandela’s philosophy on a visual journey – from a torturous past to a hope for the future – hoping to encourage the swathes of people playing an audience to his work to start writing their own story – for a better tomorrow for everybody.

He painstakingly studied historical documents while composing the painting with a counter clockwise chromatic pattern of a rainbow serving as a backdrop. Bin’s understanding of the turmoil of the struggle era is visible in the canvas and largely influences the way he has allowed the narrative to unfold.

Shanghai Zendai Chairman, Mr Dai Zhikang brought the painting to the attention of Mr. Thabo Thage, South Africa’s Consul General in Shanghai, when Mandela passed away. The painting was installed at the mourning site for Mandela in Shanghai at Mr Thage’s request.

In a written statement read at the unveiling of the artwork, Mr Dai said, “There have been many great politicians in the world, but few have achieved monumental status. Nelson Mandela is the first individual in whose honour the United Nations named an annual international day, as he is considered a model world citizen.” 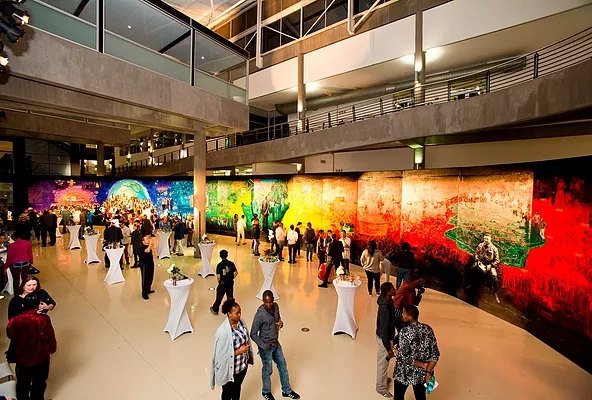 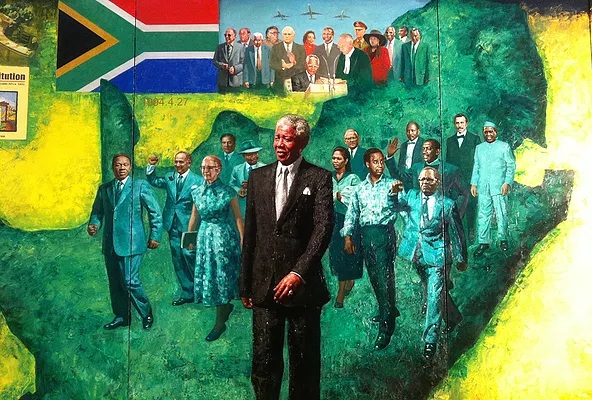 “Mandela would never have wanted South Africa to be a country with human rights violations he so fought till his end and was prepared to die for. I would like this work to serve as an urgent voice of reason to all Africans to reflect and share Mandela’s vision for South Africa.”

“After suffering such a long persecution and incarceration, after winning political power through a hard and extraordinary struggle, what he pursued was the guarantee of human dignity and racial reconciliation. He could achieve this because his heart held fraternal love boundless as the ocean.”

“In the lead up to Freedom Day in South Africa and on the occasion of the opening of this epic painting by artist Li Bin,” the Zendai Group would like to reiterate our commitment to South Africa,” he concluded.

Speaking on the occasion Li Bin said, “I created this work for the world; they had a big role to play in the artistic process. I wanted the viewer to see, be immersed in the struggle, be able to reflect and contribute to the society with fervour and the spirit of Madiba.”

“Mandela would never have wanted South Africa to be a country with human rights violations he so fought till his end and was prepared to die for. I would like this work to serve as an urgent voice of reason to all Africans to reflect and share Mandela’s vision for South Africa.”

“I would like to thank all those who made this artwork possible and accessible to all South Africans. I’d encourage people to come and share in this vision and to take what you can from this humble attempt to paint an impossible picture of true grit, determination and sacrifice,” he concluded.

This article was written by USMAN ALY