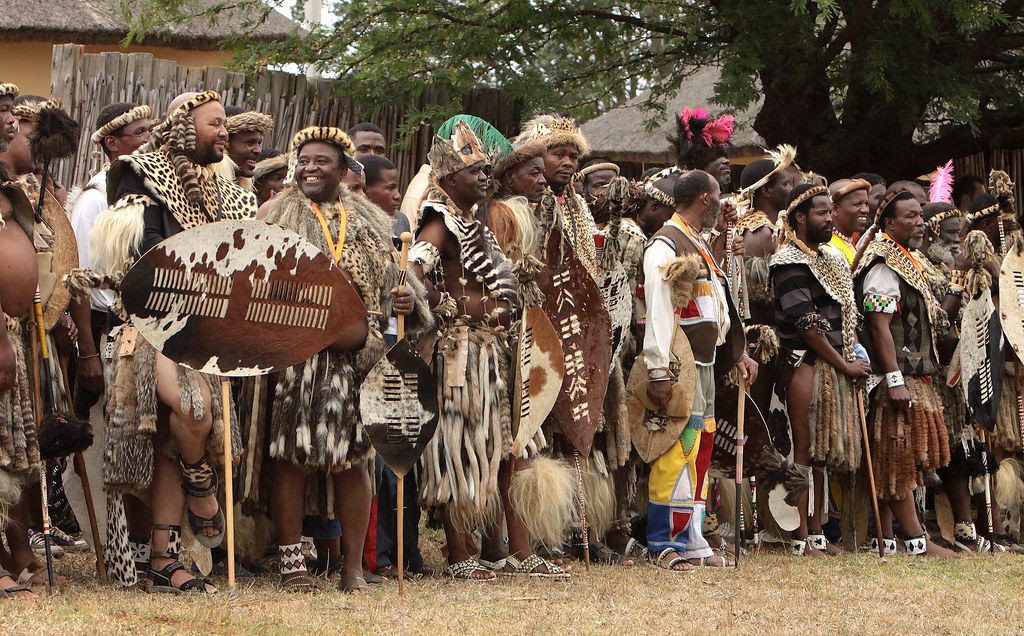 The Zulu speaking were amongst the first tribes to find South Africa.

Zulu people are the most populated tribe across the South African border. Wherever you go in South Africa, the isiZulu language becomes a primary contact to people. It becomes a greeting language to many. Wherever you go, you will get to meet someone who speaks of this language. There are about 10million residents that are fluent in this language.

Cruising down to the KwaZulu-Natal province, South Africa I got to understand and see a lot from just the KwaZulu-Natal sections. These individuals for me I should say are commonly stubborn and are non-feared people. Walking around this beautiful destination of the Zulu people really felt warm and good. South Africa is well-known for its beautiful sights to see and enjoy.

After the death of the father, Senzangakhona “he who acts with a good reason” Shaka accepted leadership of the Zulu clan who at the time were fewer. In 19th century the tribe merged into a great kingdom under the leadership of the great late Shaka Zulu.

Shaka Zulu was in power from 1816-1828, when a war (Impi) emerged. Shaka created the Assegai (Short, shape blade stabbing spear) he had proved to his peers to be a great military leader because of his wide knowledge of the war battles. After 11 years since the death of his father he lost his mother Nandi. He ended up losing battles and therefore killing over hundreds of Zulu warriors who were in the war.

Women dress according to the different stages of their lives, of which the attire may differ from that of a virgin and to someone who is married. Virgins here don’t cover their front upper body, but wear a small apron that covers either side of the bottom body part. Whilst married women will cover their entire body as a sign of she is married. An engaged women will normally cover her chest with decorative cloth as a sign of respect to their in-laws.

Amazi is (fermented milk) which taste like a mixture of cottage cheese and plain yogurt.  They believe that this Amazi makes the men in this tribe strong. The traditional beer needs to be prepared in three days by preferably a woman. The processes of preparing this traditional beer is, Maize and sorghum (grain plant) which is soaked in water for a day. Brought to a boil with dry sorghum and set to cool off which makes it ready for drinking on the third day. Before meals it is customary for a woman to present a bowl filled with water and a dry cloth for the gentlemen to wash their hands.

Zulu men are known for their strength when they gather around each other and physically start fighting. The disputes between the two gentlemen are solved on a stick fighting battle. Just like the Maasai people. The Zulu tribe amongst other indigenous tribes also perform physical fights between men. They constantly beat each other with sticks until one comes out blood and therefore is seen as the looser.

The Zulu tribe gathers around a circle to celebrate certain events, customs or whenever there is a ritual. The drums that are being played are made out of goatskin, and a black clay pot. The drums are called Ingungu, which are played to celebrate the start of a women’s first menstruation cycle. There are several dances in this tribe that celebrates the area of a Zulu tribe. Dances are performed during ceremonies of the men’s hunting. The dance symbolises the bravery of a man, by which he will have to hunt in the wild. A ritual called the Umemulo is strictly for the woman, where it shows she has passed through the age of 21 as a virgin.

Ancestral worship (also called ‘amadlozi or abaphansi). The greatest of the great (unKulunkulu) is where the Zulu tribe believe that their ancestors live. They believe that the ancestors are between the living and the spirit and protect them through harmful things also guide them in their right pathways. They will communicate through dreams, visions, snakes and sicknesses. Home-brewed beer and the slaughtering of an animal is the common form of offering to the ancestors. When a person has bad luck or is going through some sickness, Sangoma widely known as a Traditional healer must then consult the ancestors on your behalf.

Bringing up the children:

It is the mother’s duty to raise the child. The wives are taught to be obedient and to treat their husbands well and feed them on time. The children are also given pet names by their close family member, friends or herd-boy. These names commonly are used to identify the child’s ancestral background.

Roles and responsibility differ according to maturity. Some of the jobs that are meant to be done by a man are also done by a female. The girls are taught at a designated age how to carry a bowl of water on their head. She will also be taught how to plant and crop, how to make fire, preparing some dishes, and to babysit her younger sibling, if she has.

The gentlemen have to attend public meetings, decision-making, own huts, and have to the people bringing home food.  As the young teenage boys get older they are introduced to the responsibility of adulthood. Often husbands pay more attention to the herds then to their own wife/s. Unlike most ethnic group, the IsiZulu tribe differs. There will be instances where you’ll find that there is a chief and a king. A chief may be regarded as a right hand man to the King. A king is someone who owns the land of a certain region if not many. The Inkosi (Chief) is more of a mediator, admiration and the most influential person for his congregates. If a chief fails to deliver for the Kings then the Chief will most lucky suffer death.

The Practice of the polygamy in the Zulu belief shows a man’s status, virility and wealth. Each wife has her own hut or cabin; most of them even live further away from the main house. In most expectancy regardless of how many wives you have they are all put under one roof. They may be divided by huts, but they still live under the same yard. A typical example will be the former President Jacob Zuma and Zulu King Goodwill Zwelithini who both have 6 wives.

The practice of safe sex amongst the young individuals (Uku’hlobonga) without penetration is accepted. However, if the maiden is pregnant or has lost her virginity, then an amount needs to be paid in order to claim the girl on the men’s side.

Lobola is practiced in every culture of South Africa, besides the white and coloured region and is simply to thank the wife-to-be parents’ for looking after her. Excessive eye contact is seen as a sign of disrespect especially from women.

Lorraine is a South African based junior journalist with Nomad Africa magazine published by 2414 Publishing (Pty) Limited. She is very passionate about travelling and a lover of the African culture. Lorraine had a Diploma in Journalism from Rosebank College in Johannesburg, South Africa and worked as an intern with The Star Newspaper. Fluent in English and other South African languages she is very eager to learn about new cultures and traditions. Though she is still very new in the industry, Lorraine is vibrant and energetic for new travelling experiences.